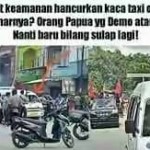 Jayapura –KNPBNews- Today 13 of April 2016 at 11:00 am, West Papua time,members of police or Jayapura Polresta has act torture to the driver a car which is bring the member of West Papua National Committee, when the peacefully demonstration on supported ULMWP Tobe full member in MSG and also International Parliamentarian for West Papua in UK on 3 of May 2016. 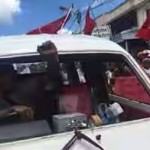 The glass of the taxi was broken by the police, this is the prove that; in peacefully demonstration which is making disordered is Indonesia police, because of Indonesia police made brick dawn the car using the rifle butt, we know that; those who are making the anarchist in peacefully Demonstration of west Papua National Committee, are all of the police member that they are living in West Papua.

During the several’s years in Papua province and others regency’s likes Yahukimo regency, Paniai, Timika, Wamena, Merauke, Jayapura, and others regency’s, in West Papua, which is always made disordered are not from demonstrator but from the Police or Polda Papua.