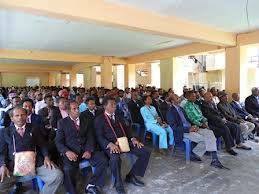 This means that our groups have united movement in ULMWP to answer the demands of membership in MSG and fight for the people’s right to self-determination in West Papua Melanesia.

The National Parliament of West Papua (PNWP) is one of the declared national groups in the formation of ULMWP.

Once again we express our immense gratitude to the Government of Vanuatu for standing together with ULMWP as we applied to register as a member of MSG on February 4, 2015 at the MSG Secretariat in Vanuatu.

PNWP would also like to thank the Prime minister of Papua New Guinea who a few days ago has firmly conveyed a new political policy of the PNG government to stand as a Melanesian brothers to want to help the cries of the people of West Papua.

The elders of West Papua are very hopeful and feel relief that PNG is our siblings and family in Melanesia. The attitude of the new Prime Minister of PNG shows a significant progress in the struggle for self-determination rights of the people of West Papua.

And hope the PNG government can commitment to be able to accept the requestof ULMWP as a member of the MSG.

PNWP also like to thank the Board of Pacific Church faithfully and continue to help hearing the cries of the people of West Papua’s struggle.

PNWP also like to thank the people’s solidarity movement in the Pacific that is increasing to stand together in the struggle for West Papuan self-determination rights of the people of West Papua.

PNWP also expressed great hope to the government of Fiji, the Solomon Island and Kanaky to be able to take a policy to be able to stand with West Papua and may receive a request ULMWP as member MSG.

Chairman of the West Papua National Parliament, declared the ULMWP

STATEMENT OF THE INDIGENOUS PEOPLE OF WEST PAPUA WEST PAPUA NATIONAL PARLIAMENT (PNWP) Recalling the Agreement between the Republic of Indonesia...

West Papua National Parliament or Parlemen Nasional West Papua (PNWP) addressing the demonstration Of Militia created by the Government of...