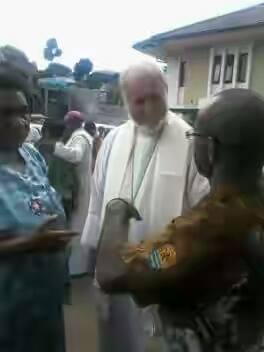 President Association uskup’s of Solomon Island and Papua New Guinea Mgr.Arnold Orowe said visited to West Papua together as 23 Uskup and others is in building work together pastoral, building relation as Melanesian race in one Island which is divide by the line of the country, for tens decade. “ we are part of the universal churches which is cannot divided by any man which is any reason.West Papua people and east Papua people part of the universal churches said in Paroki. Kristus Jaya Katedral Jayapura city of Papua. (9/4/2016). In this meeting Mrs. Pangresia Yeem MP, Chair of Region Parliament of Merauke take time to said there are several things about violence doing by Indonesia Police and Military to the people of West Papua and specially violence to the activist West Papua National Committee (knpb).

In Merauke region and broken the office of Region Parliament and KNPB in Merauke, Mrs. Panggresia Yeem reported to the President of Association Uskups Solomon Island and Papua New Guinea just recently in Jayapura-West Papua.

On April 5, 1961, the installation took place from the first (elected) parliament of West Papua: the New Guinea Council. HOLLANDIA –...