Join the National Parliament of West Papua
Home / All Posts / Post formats & All widgets / Westminster Declaration for an Internationally...

On 3rd May 2016, Government representatives from around the world met in Westminster to declare their support for an internationally supervised vote on self-determination for the people of West Papua.

Westminster Declaration for an Internationally Supervised Vote in West Papua 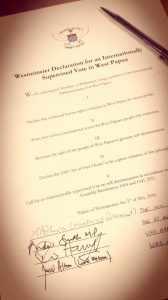 We the undersigned Members of Parliament

Reiterate the right of the people of West Papua to genuine self-determination.

Declare the 1969 ‘Act of Free Choice’ to be a gross violation of this principle.

Call for an internationally supervised vote on self-determination in accordance

West Papua National Parliament or Parlemen Nasional West Papua (PNWP) addressing the demonstration Of Militia created by the Government of...

West Papua was colonised by the Netherlands in 1898, along with the islands that now make up Indonesia. When the Republic of Indonesia became an...

There are many variations of passages of Lorem Ipsum available, but the majority have suffered alteration in some form, by injected humour, or randomised words which don't look even slightly believable. If you are going to use a passage of Lorem Ipsum, you need to be sure there isn't anything embarrassing hidden in the middle of text.