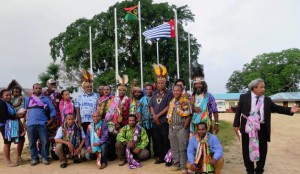 The key groups to have united include the National Parliament of West Papua (PNWP), which incorporates the KNPB (National Committee for West Papua); the Federal Republic of West Papua (NRFPB) and the National Coalition for Liberation (WPNCL).  An external secretariat consisting of five elected members from the various groups will now co-ordinate the ULMWP. Octovianus Mote, a former journalist who has been based in the US for many years, has been elected General Secretary of the ULMWP. Benny Wenda is the spokesperson and the other three elected members are Rex Rumakiek, Leonie Tanggahma and Jacob Rumbiak.

*The ULMWP gained observer status in the Melanesian Spearhead Group.

International Parliamentarians for West Papua (IPWP) is a cross-party group of politicians from around the world, supporting self-determination for the people of West Papua.

International Lawyers for West Papua (ILWP) is a network of legal professionals who recognise that the indigenous peoples of West Papua have a fundamental right to self-determination under international law. We also work towards strengthening and preserving the other human rights rights and freedoms of the people of West Papua.

IPWP and ILWP have been set up to engage parliamentarians and lawyers, working towards the goal of self-determination for the people of West Papua.

Proclamation of the Republic of West Papua

As a protest against the fraudulent Act of “Free” Choice in July / August 1969, brigadier-general Seth J. RumkoremÂ  and Jacob...