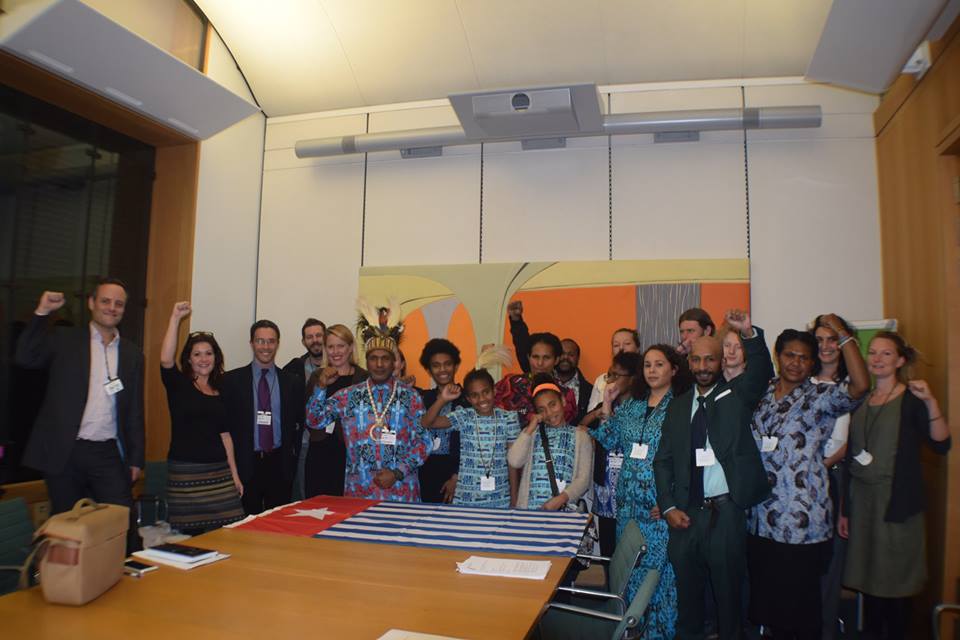 Official signing and naming of Chair, co-chair and officers of the APPG.
Chair – Andrew Smith MP. The APPG was also informed of 2 British journalists Rebecca Prosser and Neil Bonner, currently be held in Indonesian jails for filming in the Malacca straight without the correct visa.

The APPG on West Papua agreed to work with various British institutions including the National Union of Journalists (NUJ) to support the freedom needed for foreign journalists to access West Papua so that they can report on alleged human rights violations and so they can fully investigate the Act of Free Choice.

West Papuan Independence Leader Benny Wenda addressed the members of the All Party group and briefed them on the political situation in West Papua, as well as the historical recognition achieved for the West Papuan people following the granting of Observer Status at the Melanesian Spearhead Group (MSG) to the United Liberation Movement for West Papua (ULMWP). Benny Wenda also expressed his deep gratitude to all those who helped this group to be formed and he explained to those at the meeting that this was an incredibly significant step forward on the road to legal self determination to international standards for West Papua and that the West Papuan people were all following this launch with full support and confidence. Jennifer Robinson, founder of the International Lawyers for West Papua (ILWP), briefed Parliamentarians on West Papua’ legal right to self-determination whilst also confirming the unprecedented significance of international recognition through the MSG. Ms Robinson then briefed the APPG on the final communique of the Pacific Islands Forum and the forum’s intention to seek a fact finding mission to West Papua.

Recent representation at the United Nations.

The APPG acknowledged the recent Statements on Sep 30th and Oct 1st 2015, by the governments of the Solomon Islands and Tonga at the United Nations General assembly.

Solomon Islands PM , Hon Mannaseh Sogavare stated that “in the long term the UN cannot shy away from the root cause of ongoing violations against the West Papuan people.”

Tongan PM, Hon Akilisi Pohiva, stated before the general assembly of the UN that, “leaders should work together against injustice and cruel violation of human rights, as in the case of West Papua in Melanesia in the Pacific. This is within our power. It is a choice that those with power and privilege can make. United Nations has a duty to closely follow up this West Papua case and necessary action be taken to stop this brutal and inhuman activities. We leaders must rise to a higher moral order beyond interest, and be guided by what is fair and justiciable to all.” The APPG then highlighted previous recent statements in the UN by the government of Vanuatu. Previously, on March 4th 2014, Vanuatu PM Moana Kalosil had stated to the UN, in reference to the Act of free choice, that, “we must not be afraid if the UN had made some mistakes in the past. We must admit our mistakes and correct them.” Since the controversial Act of Free Choice in 1969, the Melanesian People of West Papua have been subject to on-going human rights violations committed by the Indonesian security services. The world has witnessed the litany of tortures, murders, exploitation, rapes, military raids, arbitrary arrests and dividing of civil society through intelligence operations. Mr. President, as a Melanesian citizen, I have come here to call for immediate action. Injustice in West Papua is a threat to the principle of justice everywhere in the world.

The root cause of the issues in West Papua.

The APPG discussed the roots of the ongoing situation in West Papua. The root cause that is often referred to as the source of all problems in West Papua is the contested Act of free choice in 1969. The act of self-determination by which Indonesia claims sovereignty over West Papua. Lord Harries, cochair of the APPG, reiterated to the APPG that Baroness Symons, on behalf of the British government, had previously stated in Westminster that, in the Act of free choice, 1969, around 1000 West Papuans were “largely coerced” into voting to join Indonesia.

The APPG on West Papua will regularly be raising the issue of West Papua in the British parliament.

Mālō ‘aupito to the Prime Minister, government and people of the Kingdom of Tonga for all their incredible support and Pacific Island solidarity...