Join the National Parliament of West Papua
Home / All Posts / Skin Politics / Government of the Kingdom of Tonga support...

Posted May 6, 2016 | by West Papua National Parliament | in Skin Politics 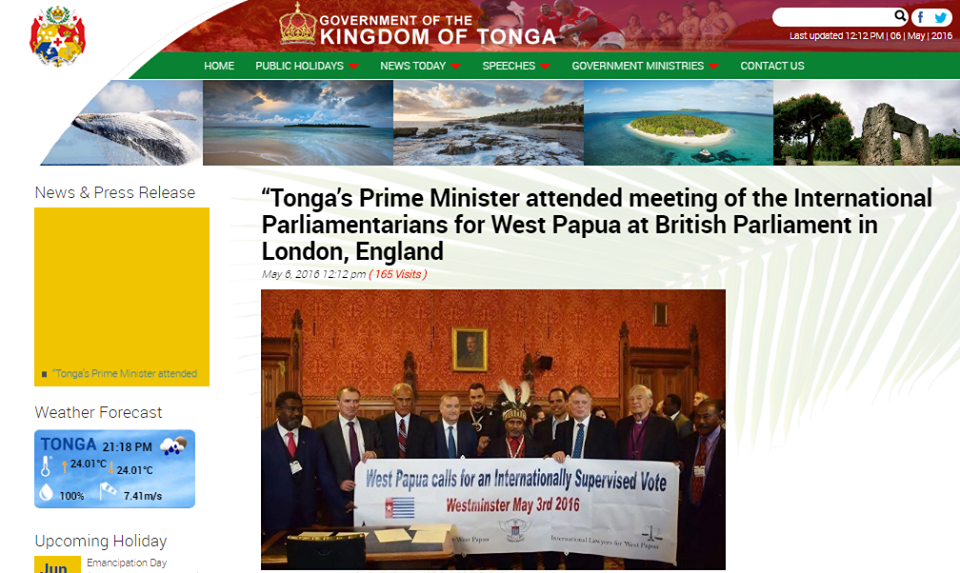 Mālō ‘aupito to the Prime Minister, government and people of the Kingdom of Tonga for all their incredible support and Pacific Island solidarity for the people of West Papua.

06th May 2016 The Prime Minister of Tonga, Hon. Samuela ‘Akilisi Pohiva, led Tonga’s delegation to the Meeting of the International Parliamentarians for West Papua which was held at the House of Parliament in London, England on 3rd May, 2016. The purpose of the meeting was to discuss and have a common understanding that (1) the continued human rights violations in West Papua are unacceptable, (2) everyone has a right to genuine self-determination, including the West Papuan people, and (3) this can be achieved peacefully through an internationally supervised vote on self-determination in accordance with the UN General Assembly Resolutions 1514 and 1514 (XV) of 14 December 1960.

The Hon. Samuela ‘Akilisi Pohiva was invited by the Secretary-General of the United Liberation Movement for West Papua, Mr. Octovanius Mote, and the International Spokesperson of the Movement, Mr. Benny Wenda, to join in the announcement of the ‘Friends of West Papua’ Group launch and to deliver a statement at the meeting of the International Parliamentarians for West Papua at the session entitled ‘The Political Future of the West Papuan People.’

The common focus of the United Liberation Movement, the Free West Papua Campaign, the International Parliamentarians for West Papua and the newly established Friends of West Papua Group is to address the issue of human rights in West Papua at every level.

In statement, the Hon. Prime Minister spoke of the United Nation’s new Sustainable Development Goals for the year 2030 and its objectives of good governance, effective accountability and inclusive institutions. He reiterated that these objectives are impossible to achieve without the full support for the human rights of all people living in areas of conflict throughout the world and in the peaceful Pacific region. The Hon. Prime Minister stressed that conflict must be resolved by peaceful means and, while recognizing the sovereignty of states, he re-emphasized the need for the protection of human rights of all persons.

The Hon. Prime Minister encouraged Governments and Leaders to work together against injustice and cruel violation of human rights and dignity by supporting all efforts that are being made to ensure that the United Nations is ‘fit for purpose’ to implement the 2030 Agenda. He also called for the solidarity and support of the Wider Pacific community and regional organizations to give attention to West Papua.